An on-line tool developed by COMPAS, the Centre on Migration, Policy and Society, with funding from The Legal Education Foundation, has won a Community Integration Award. The tool helps NGO advice providers and local authorities to assess the eligibility of destitute migrant children and parents for local authority support.

The tool was launched in January, after a complex research and design process, and is already well used by NGOs, local authorities and migrants themselves (in some cases as advised by NGOs). The tool has been widely promoted, including via a link from the Citizens Advice site.

The tool is available to view at http://migrantfamilies.nrpfnetwork.org.uk

Hastings-based Advocacy Charity wins Prestigious ‘Best use of IT’ award

seAp - a charity that helps patients, benefits claimants and others ensure their views are heard - has won a national award for an app which guides people through applying for Employment Support Allowance or Personal Independence Payments. 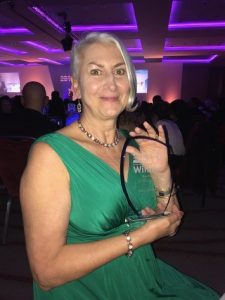 seAp's strategic services development manager Liz Fenton, who was instrumental in the development of the C-app, accepted the Charity Times award for best use of technology, at a ceremony in London earlier this week. The small, Hastings-based charity, which spent a year developing the app, was up against competition for the award from much bigger national organisations, including Age UK and the National Trust.

The app was funded by The Legal Education Foundation, as part of its remit of using technology to help people use and understand the law. It also received funding from Comic Relief.

seAp primarily serves the local community around Hastings, but C-app is intended to make its expertise and support available to disability and work capacity claimants nationwide.

Liz Fenton said developing the app had been 'a true team effort' and 'a mammoth task'.

TLEF chief executive Matthew Smerdon said: 'It's wonderful to see seAp receiving national recognition for the vital work it is doing to help people through what can be a daunting and confusing process.'

TLEF's 2017 annual review - due to be published later this year - will include a detailed case study of the development of seAp's C-app.

The Foundation has supported Prisoners Advice Service to create a range of self-help toolkits for prisoners to help them navigate a range of legal processes.

The toolkits can be found on the Prisoners Advice Service web-site at this link - www.prisonersadvice.org.uk/information/pas-tool-kits

Organisations intending to make a grant application for consideration in the October 2017 grant round should ensure that their application is completed and submitted no later than 5pm on Tuesday 3rd October.

Once all applications have been received, the selection process will start with final decisions being indicated to applicants by mid-December.